Current situation of auriferous (gold) mining and other minerals

Current situation of auriferous (gold) mining and other minerals

Technified mining in Venezuela began in the 1950s. Previously, on an industrial scale, the focus was on the exploitation of iron [1], with some areas of interest  for gold, such as El Callao. At the artisan level, other localities for the extraction of diamond and gold existed. All in the Bolivar state. In the 1980s, due to an increase in the prices of gold, its industrial operation intensified. The epicenters were located in El Callao and the Lower Caroní, both in the Bolivar state. At that time, the first reports of invasions by illegal miners (garimpeiros) to Venezuelan soil occured, especially in Yanomami territory, southeast of Amazonas state, where the Hashimu massacre took place [2].

That is when pollution of water bodies, their biota, the miners, and residents of nearby communities begins. The use of mercury becomes commonplace. The main difference between isolated concessionaires and miners is the efficiency with which they recover the gold, and therefore, the degree of exposure to mercury vapors. By 1989 and 1993 [3], there already were reports of miners, inhabitants, and fish contaminated with mercury.

In the Venezuelan Amazon, concessions for gold and diamond extraction were concentrated in the Bolivar state [4]. They reached an approximate area of 23,050 km2 where the Imataca Forest Reserve and some sectors of the Lower Caroní and the surroundings of El Callao-Las Claritas (Cuyuní river basin) were the most affected. In the State of Amazonas, resources extraction, including gold [2] is banned. Delta Amacuro was not of greater interest as oil and gas were of greater importance there. Industrial mining associated with concessions, had some environmental controls. On the other hand, artisan or traditional mining (without mercury and machinery) was carried out in multiple points within the Amazonian region [4].

A rise in the price of gold, the country’s economic circumstances, the fall of oil prices, the fragility of official institutions, and their limited capacity for independent oversight has given way to a chaotic process of exploitation in what was once a well preserved Venezuelan Guiana. This process was supposed to be «ordered» and «sanitized» by the creation of the Orinoco Mining Arc National Strategic Development Zone (ZDEN AMO) (Figure 1), finally made official in 2016 but planned since 2011[6]. On the contrary, in reality,  mining activities have become massive and without any kind of control (Figure 2). Coltan adds to the existing exploitation of diamonds and gold, but the latter takes levels never seen before. Its scope reaches the Amazonas state, national parks and natural monuments throughout the region, where it is explicitly prohibited by law. 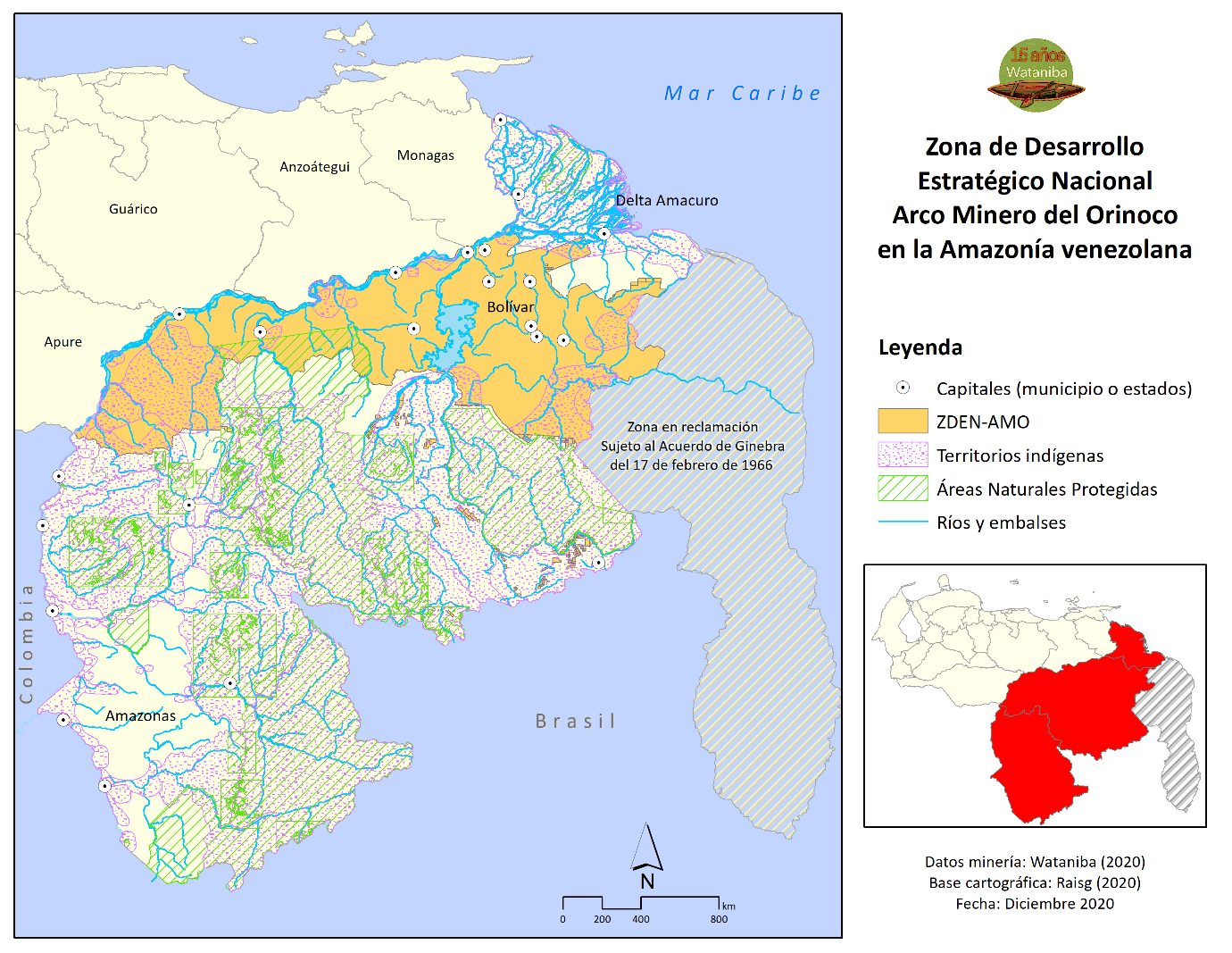 The initial area [5] available for legal mining within the framework of the ZDEN is close to 112 thousand km2. However, when considering the Ikabarú Special Zone, it reaches 113,598 km2. It is larger than Honduras, Cuba, Guatemala, Portugal, and more than other eighty countries. After the creation of National Park Caura and when the overlap between the two figures became evident, a downsize of the ZDEN was announced. However, no official documents (such as gazettes) are available to support this change. 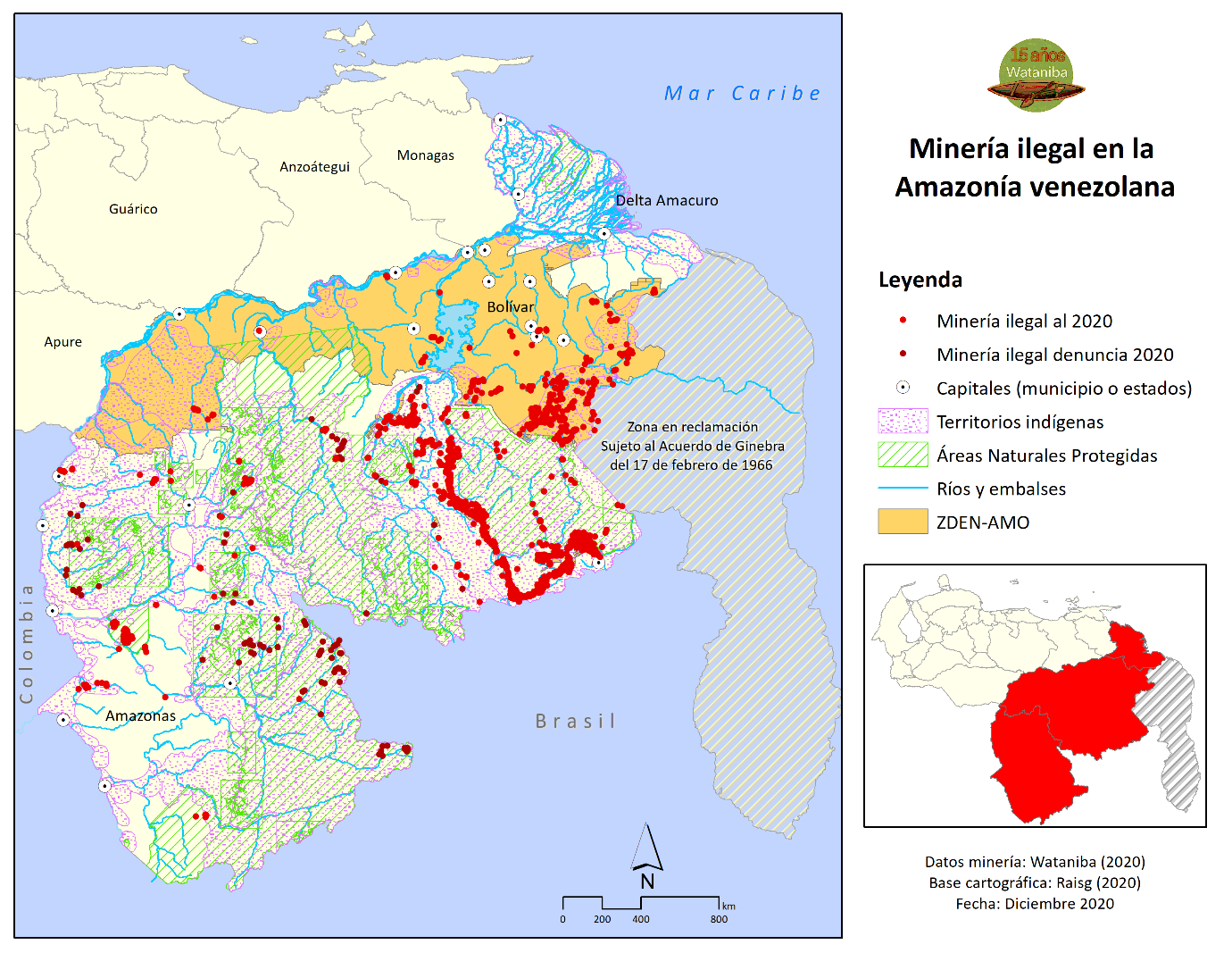 The monitoring of illegal mining in the Venezuelan Amazon is a complicated process, advanced thanks to the combination of satellite images and complaints from experts in the area and local indigenous communities. However, it is still a work in progress. In March 2019, 1,982 illegal mining sites to extract coltan, diamonds, and gold were detected, with an estimated area of 33,926 hectares (46,157 soccer fields). In 2020 (Figure 2), 1,314 mining localities were detected for the same month, with an estimated area of 116,565 hectares (more than 158 thousand soccer fields). Although the number of localities is lower in 2020, the affected land area is 3.4 times greater, which is explained by the expansion of these localities until they merged with each other. This increase in mining activity is alarming. It accounts for multiple reasons: a very complicated national situation,  a lack of controls, enforcement capacity and the will to do so by the responsible institutions. Probably a reason for weight is the high profitability of a business that need not have to be accountable socially, environmentally, or even on human rights [6].

Though the increase in deforestation and land degradation has been vertiginous, especially in one of the tropics’ once best-preserved regions, illegal gold mining’s effects last longer on aquatic ecosystems. Mercury pollutes watercourses and the entire biota and those who feed from it. The greatest river basins of the region are already polluted with mercury. Bioaccumulation of mercury and other substances ranges from small plankton organisms to freshwater mammals. Furthermore, given the high mobility of many fish species and other vertebrates, there is no need for mining in a river for most of its fauna to be contaminated by this heavy metal. Once mercury enters the body of a fish, a dolphin, or a person, it tends to accumulate in different tissues. It also replaces metallic elements  such as calcium and magnesium, which are key for the body to perform vital processes. The capacity of the various systems to expel this heavy metal is minimal. Hence it passes through the different components of the trophic webs, accumulating. The greater the range of mobility a species has, the further the pollution will extend. Indigenous peoples, for whom fish is an essential source of protein are the most affected.

The national parks and natural monuments of the Venezuelan Amazon were considered part of a fundamental strategy to conserve the diversity of ecosystems and species found there, the water sources, and finally, their multiple biotic and abiotic elements. Its legal status gave it an apparently high level of protection. However, at this time, mining sites are detected both adjacent to, and within national parks and natural monuments (Figure 2). When these national parks are not directly affected by mining, the mining occurring higher up in the river and/or in parts of the watershed spreads to these areas. Such is the case of the National Park Delta of the Orinoco. In Bolivar state, the Canaima National Park is the most affected, while in Amazonas state it is the Yapacana National Park [7]. Parks that are extremely remote for many Venezuelans, such as Sierra de la Neblina, have had several mining locations for some years (Figure 2)

The same situation also happens within indigenous territories. More and more areas are being destroyed. There have been no prior consultation processes under clear, fair conditions and with respect for cultural diversity. Furthermore, the entry and exit of miners to their territories affects them not only through environmental degradation, it also generates profound damage at the social, cultural, health and human rights levels [8]. Illegal miners carry  diseases that are new to indigenous peoples, which puts them in a vulnerable position, exacerbated by the health system’s fragility in these states, particularly in remote areas.

Monitoring the level of mercury pollution in human populations and the different components of the ecosystems affected by the exploitation of gold has been relatively limited in Venezuela [9]. The most recent studies, done in human populations, date from 2010-2011 in Ye’kwana communities of the current Caura National Park. In wild species, the situation is similar, so we do not know the status after the  mining boom. However, in 2019 a study where several species of freshwater dolphins were worked at the level of the Panamazonia, found that the samples with the highest level of mercury in their tissues came from samples of dolphins collected in the Orinoco River, in the border between Venezuela and Colombia, with values of 4 mg of mercury per kilo of tissue [10]. These values indicate very high contamination by this heavy metal, which constitutes a very high risk for human populations.

Mining xpanding in a vertiginous manner in Venezuela and is carried out without accounting for the rights of indigenous peoples nor  for environmental regulations, both nationally and internationally. Just in gold mining, the use of mercury is illegal, for it contravenes international conventions and can only be commercialized by the country’s government. Those responsible for enforcing regulations as well as those who need to follow them are unfamiliar with these regulations and with international treaties on the subject.  The ZDEN-AMO not only has been useless in organising mining, but in itself is a violation of multiple human and environmental rights.  Furthermore, the availability of sources of water and food and the production of electricity are strongly compromised for current and future generations of venezuelans.

Mining exploitation and institutionality in 21st century Venezuela EXPLORA Magazine. Second Special Edition. 2021. A responsible mining activity is developed under a framework that foresees a geological prospecting and exploration campaign for the identification, quantification Read more…

How deforestation and degradation of forests in the southern Orinoco affects the survival of the Harpy Eagle EXPLORA Magazine. Second Special Edition. 2021. The harpy eagle and the Amazon rainforest can be described as giants Read more…